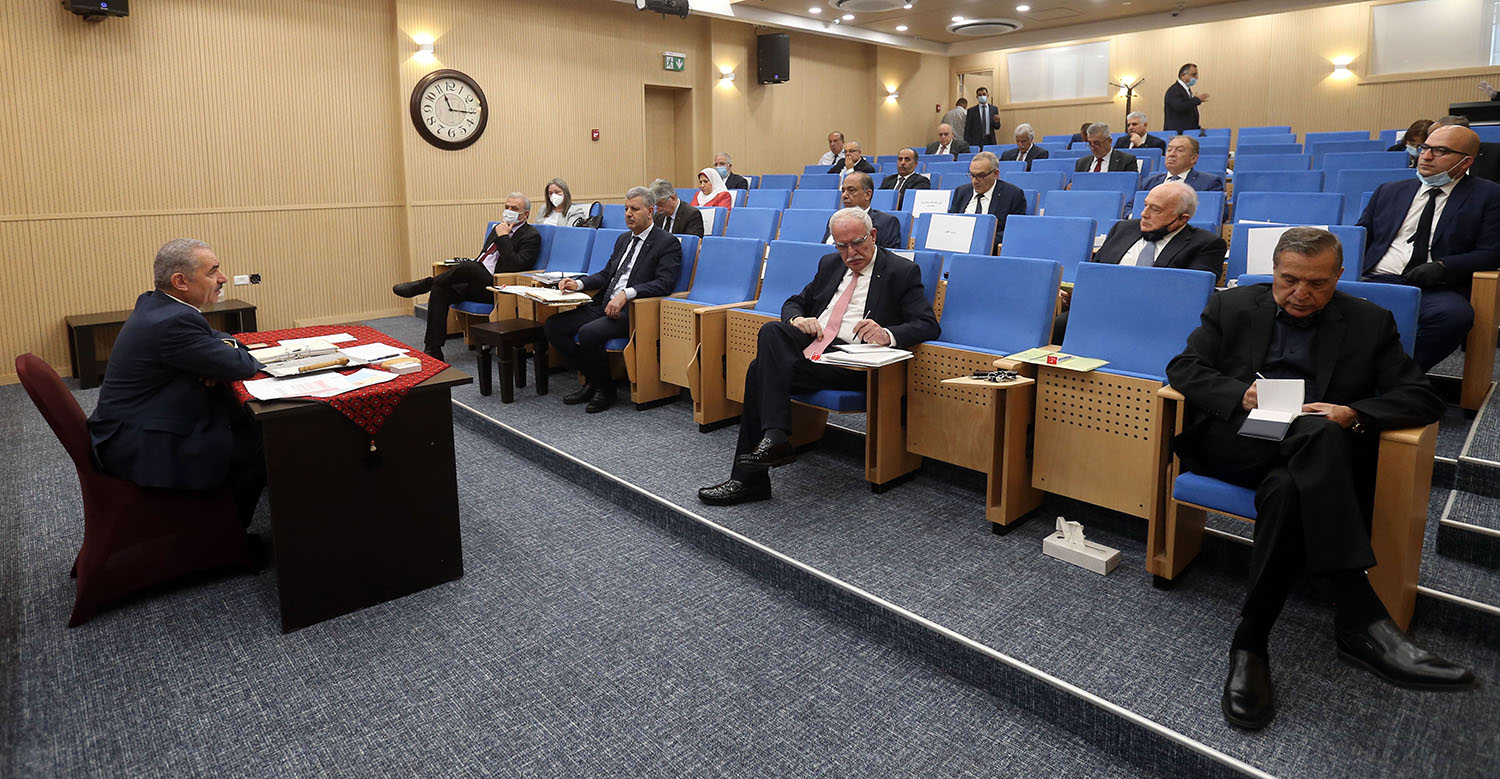 Prime Minister Mohammad Shtayyeh gave orders last night to his cabinet members to immediately start work on implementing the decision of the Palestinian leadership regarding ending all agreements and understandings with Israel.

Shtayyeh’s remarks came during a Palestinian cabinet emergency meeting held in Ramallah to discuss the implementation of the decision announced on Tuesday by President Mahmoud Abbas concerning the relationship with Israel and the United States.

During the meeting, Prime Minister Shtayyeh confirmed the Palestinian government’s full support to the decision announced by President Abbas and the Palestinian leadership to be absolved of all signed agreements and understandings with the Israeli and American sides. He stressed that “we would work on translating this decision on the ground.”

“The announcement of the annexation of Palestinian lands and the imposition of Israeli sovereignty over the settlements is a violation of our signed agreements with Israel, a violation of international law and international legitimacy, and a threat to regional and international security. It reflects the agenda of the government coalition in Israel, which systematically works to destroy the establishment of the State of Palestine in addition to the siege on the Gaza Strip, the isolation and annexation of occupied Jerusalem, and the use of area ‘C’ as a strategic reservoir to expand its settlements,” said the Prime Minister.

Area C makes over 60 percent of the area of the West Bank which remained under Israeli military control after the signing of the Oslo accords in 1993.

Shtayyeh called on the countries that have not yet recognized Palestine on the 1967 borders with East Jerusalem as its capital to do so as soon as possible to salvage peace and the two-state solution.

“The international position rejecting annexation and the Deal of the Century stands in support of Palestine and building its institutions towards the materialization of the State of Palestine on the ground with Jerusalem as its capital and the right of return for refugees. We call on the world’s countries to recognize Palestine. It’s the right time and moment of truth for all who believe in the two-state solution,” he said, stressing, however, that “denouncement and condemnation statements today are not enough. We want the world to stand for the moment of truth by recognizing the State of Palestine.”

He called on the international community “to rise to the level of responsibility and provide international protection for our people who are under occupation.”

He stressed that “it is the Israeli government that ended all security, political, economic, and legal agreements, and therefore it is inconceivable to maintain a unilateral commitment. Israel has violated all agreements by annexation, colonization, the siege on the Gaza Strip, and abuse of prisoners and their allocations, Jerusalem, and water. In addition to various violations in all areas of life, Israel has hit the authority’s sovereignty and restored the military rule of its civil administration.”

The Prime Minister concluded: “From the government’s side, we will remain in the service of our people with everything we can while facing the novel coronavirus, the annexation procedures, and every aggression against our people.”