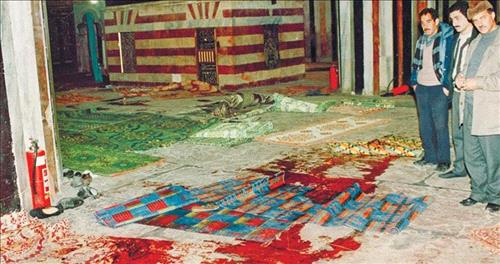 Twenty-six years ago, on February 25, 1994, a Jewish settler named Baruch Goldstein, an Israeli army physician, opened indiscriminate fire from his army-issued automatic rifle at hundreds of Muslims as they were performing the dawn prayer on a Ramadan day at the Ibrahimi Mosque in southern West Bank city of Hebron.

After several minutes of shooting, 29 worshippers were killed and 150 others were wounded before people were able to overcome the murderer and end his life.

As if this was not enough, Israeli soldiers on that day killed an additional 21 Palestinians who took to the streets in the occupied territories to protest the massacre in Hebron.

Instead of taking action against the extremist settlers in Hebron, particularly in the illegal Kiryat Arba settlement in Hebron where Goldstein lives, by removing them from Hebron, the Israeli authorities punished the victims, the Palestinians.

The mosque was closed for six months after the incident to be opened divided between Muslims and Jews when for centuries it was a purely Muslim worship place.

At the same time, Palestinians in areas in the heart of Hebron where settlers had set up illegal bases were restricted in movement and shops were forced to shut down. Entire streets became off to Palestinians where Jewish settlers were allowed to roam them freely and under heavy army protection.

This situation is continuing until today, and it has even become worse.