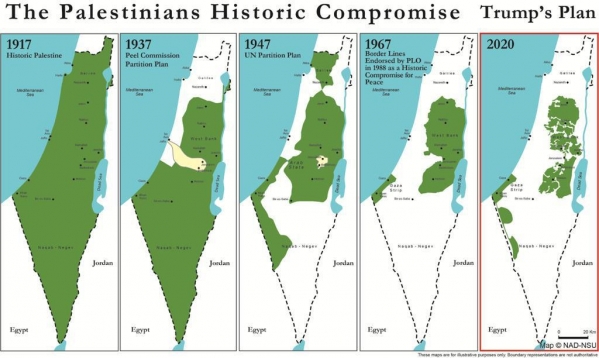 SUMMARY OF DEAL OF THE CENTURY

After carefully studying the Deal, here is my summary for the 181 pages:

The Deal of the Century calls itself a vision to improve the lives of the Palestinian and Israeli people. The deal came in two
frameworks:
1- Political Framework – first 50 pages
2- Economic framework – the rest 130 pages
The Political Framework
I will cover this in bullet points to cover (Jerusalem, Refugees, Prisoners, Borders, Security, International Relations, UN,
Sovereignty and State)

– The Trump vision does not recite UN Resolutions (General Assembly or Security Council) as the deal clarifies: UN resolutions including 242, have not and will not solve the conflict, those resolutions have enabled political leaders to avoid addressing the complexities of the conflict rather than enabling a realistic path to peace!
– The deal contradicts itself as it says in the last pages, once the deal is signed by both parties, a UN resolution (SC & GA) will be adopted to terminate the conflict and the claims to it! The agreement shall end the Palestinian Israeli conflict and all claims which shall come as a new UNSC and UNGA resolutions!

Sovereignty, Security & International Relations
– Sovereign powers, Security, territorial waters and airspace is Israel’s responsibility
– Sovereignty on Roads, Borders, Airspace and Entry Points is for Israel
– No Port No Airport
– Regional Security Cooperation: Israel is NO threat to the region, New chapter on the Middle East history where courageous leaders understand the shared threats had created a regional cooperation, Israël is not a threat to the region whatsoever. Threat from Iran and the shared interests between Israel, the Gulf, Palestine, Jordan & Egypt should form « OSCME » organisation for Security and cooperation
in the Middle East.
– Security Criteria (Review committee) and (Regional Security Committee) Israel decides when Palestine has fulfilled the Security Criteria and if it is eligible for a Statehood status
– If Palestine meets the security criteria, then the USA will reopen the PLO office in Washington, will open a mission for the PNA and later an embassy in AlQuds.
– Palestine will be able to establish diplomatic relations. But can’t join all Int. organizations that contradicts commitment to demilitarization and cessation of political and judicial warfare against the state of Israel!
– Palestine can’t join international organizations without the consent of Israel.
– Palestine should take no action & dismiss all actions against Israel in ICC and ICJ or Interpol.
– Peace Education (textbooks, curriculum) joint commission on acceptance and tolerance.
– Arab countries and Palestine should cease to support BDS or any anti Israeli initiative.
– Israel, Palestine and Arab countries should counter Hezbollah, ISIS, Hamas.
– Palestinian negotiators must commit to non violence, recognize the state of Israel.
– Security portion of this Vision was developed as presented by successive Israeli governments to the United States.

State
– Palestine, fully demilitarized State
– Nation State of Palestine and nation state of the Jewish people
– Nation state of the Jewish people to be recognized throughout the world
– Future Palestinian State (Demilitarized, self governed, legal status, innovative network of roads, bridges, and tunnels) that enable freedom of movement.
– In order to enjoy statehood, Palestinians have to meet the security criteria and include peace in the Palestinian curriculum in addition to terminating the payments to families of Martyrs and Prisoners (the plan refers to them as Terrorists)
– Normalization with all countries
– Transportation contiguity greatly reduces the need for checkpoints!
– International Fund for (tunnels, port, roads, bridges, fences, overpasses, rail links, border crossings) Borders
– Land Swap for populated areas include the triangle communities to become part of the state of Palestine.
– Borders and access roads under Israeli sovereignty
– Wall will be aligned to match new borders
– Crossing Board – security personnel shall wear civilian uniforms

Prisoners
– Prisoners will be released: except for those linked to killing Israelis directly or indirectly.
– Those will sign a pledge to promote co existence and they can’t seek asylum in a 3rd country.
– Condition of release: All Israeli captives have to be returned to Israel.

Refugees
– Palestinian & Jewish refugees as a result of conflict
– The vision equates between Palestinian and Jewish refugees
– A fair, just and realistic solution to the Palestinian/Jewish refugees must be found with no mention of 194. No right of return to Israel. Eligibility to refugees’ rights; individuals must be registered by UNRWA.
– 3 options: become citizens of the country they are in, resettle in a 3rd country or move to the new state of Palestine.
– The Palestinian refugees Trust will be created for
compensation
– Compensation for Israeli refugees, compensation for the state of Israel for the cost of absorbing Jewish refugees. Jewish refugees’ solution must be implemented through an international mechanism separate from this peace agreement.
– Upon signing, UNRWA will be terminated.
– Refugee camps will be dismantled and replaced with permanent housing.

Gaza
– Gaza (Demilitarized, Disarmed)
– Once Israel decides that Palestinians had met the security criteria, Gaza shall have an Artificial island on its shores to host an airport and port, a model like Singapore is imagined for Gaza.

Settlements
– Settlements/Israeli enclaves shall become part of the state of Israel – no uprooting
– Access routes under Israeli security responsibility Jordan Valley
– Jordan valley under Israeli sovereignty.
– Existing agricultural enterprises controlled or owned by Palestinians shall continue after licenses or leases by Israel.

– Free trade Zone between Jordan and Palestine/ exporting goods through a Jordanian airport
– Free Trade agreement between Palestine and the US.
– Port facilities in Gaza in the future if Israel decides that Palestinians had met their security criteria. For now, Ashdod and Haifa ports. Fast track transportation system under Israeli security control under applicable tariff agreements.
Charging and collection of taxes is the responsibility of Palestine. No rental fees.
– Aqaba port in Jordan Fast track transportation system for Palestine, taxes are Palestinian responsibility. Palestinian state pays rental fees.
– Gaza Port & Airport: 5 years after the agreement port on an artificial island.

Tourism
– A vision for a prosperous tourism boosted economy with hotels
– AlQuds World Class Touristic zone in Atarot
– Dead Sea resort area for Palestine under Israeli sovereignty with linking road to Palestine. The resort should not alter the distribution of natural resource between Jordan and Israel.
– Transportation contiguity through Bridges, Tunnels and a road network greatly reduces the need for checkpoints!

This Deal/Vision is a New Marshal Plan that will be implemented over 10 years. It consists of three initiatives that will support
distinct pillars of the Palestinian society: the economy, the people, and the government. With the potential to facilitate more than $50
billion in new investment over ten years, the Trump administration claims that Peace to Prosperity represents the most ambitious and comprehensive international effort for the Palestinians to date.
It is important to note that the proposed projects are drawn from private sector proposals, government planning documents, independent analysis, and the work of previous studies from organizations such as the World Bank Group, the International Monetary Fund, the Office of the Quartet, and others. Studying the proposed plan, I witnessed a lot of creative thinking,innovation, Technology, pragmatism, modernity and a lot of dreams/visions which were produced professionally to confiscate Palestinian rights and annex land. The Economic framework will look attractive/seducing to many, nevertheless, any Deal/Vision for Peace based on international references and UN resolutions on 1967 borders could have achieved much more economic benefits than those presented in the Trump vision. Trump & Netanyahu are not waiting for the Palestinian approval on this deal, the announcement came as a provocative short notice for the Palestinian people that this Israeli/American vision is already underway to confiscate/annex what remains on the
ground. Under the moto of the 2 states solution, they are taking the conflict to a 1 state solution where the Palestinian people will  be treated as second class citizens, Palestinians will stay here and no Palestinian will accept to be party to this deal of annexation.
They will say, Palestinians are wasting a chance for peace, allow me to highlight that the Trump administration uses the term “Facilitator” instead of “Mediator” as they are perfectly aware of the role of the mediator in trying to bring the sides of the conflict to a common ground, they had abandoned their role as mediators. This is a blunt confession from the Trump’s team that this is a
business deal rather than a peace deal. The last lines of the vision say, and I quote: “While the vision is ambitious, it is achievable. The future of the Palestinians is one of huge promise and potential.” With the following words, the Trump vision end: “The Palestinian story does not end here. Their story is just being written”. We, the people of Palestine, alone are entitled to write/narrate our story of Liberation, Freedom, Dignity, Resilience and Peace.