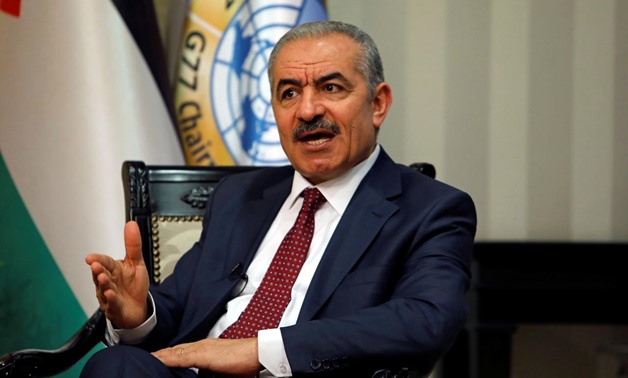 Premier: We are very concerned about American, Israeli projects in Gaza, West Bank

“The government views with great concern and follows the news coming from the Gaza Strip about projects and plans in the framework of the implementation of the deal of the century, and corresponds to the plans announced by (US president’s senior advisor) Jared Kushner at the Manama workshop last June,” said Shtayyeh, speaking at the opening of the weekly cabinet meeting held in Ramallah.

“The American hospital declared to be implemented on the borders of Gaza, industrial cities, ports and floating islands embody the American plan that refuses to deal with the political demands and the national rights of the Palestinian people,” he added.

These projects and schemes, which are an outcome of the deal of the century, aim at eliminating the Palestinian national project, he said.

Shtayyeh stressed his government’s rejection of all Israeli settlement plans, especially in the cities of Jerusalem and Hebron, and called upon the international community to take immediate measures against such plans.

“The new settlement project in Hebron’s wholesale market confirms Israel’s insistence on direct collision as it implements a destructive scheme with broad political objectives,” he said, pointing out that these plans come while settlers are escalating their violence against Palestinian civilians in the West Bank under Israeli army protection and command.

He pointed out that “the timing of these projects coincides with talk about elections and the restoration of national unity, and comes while Gaza is under siege and under the slogan of improving conditions, but the fact remains that these projects perpetuate the status quo in the Gaza Strip, deviate the compass from national unity and strike at the foundations of the Palestinian national project.”

Shtayyeh stressed the need to end the intra-Palestinian division by holding the general elections.