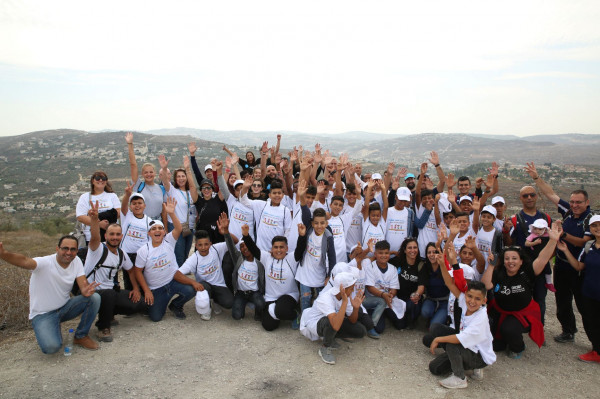 The United Nations and The European Union conclude today their 30-day walk for child rights along the Masar Ibrahim Al Khalil trail in the West Bank, marking the 30th anniversary of the Convention on the Rights of the Child, according to a press release.

Representatives of the UN, the EU, and the Palestinian Authority joined Palestinian students to celebrate the final stretch of the 30-day awareness-raising walk for child rights along the Masar Ibrahim Al-Khalil Trail.

Some 2,000 children from local schools walked the trail over the last month, accompanied by UN agencies, the EU, child rights organizations, and the public. A different article of the convention was highlighted during each segment of the walk, said the press release.

“2019 marks 30 years since the Convention on the Rights of the Child (CRC) was signed in 1989. The commitment of Palestinian families, communities, and authorities to the rights of children is evident every day, however much remains to be done to ensure the full realization of children’s rights. We hope that the walks undertaken over these last 30 days further focuses attention on how to safeguard and promote children’s rights in the very unique and challenging context of Palestine,” said the Resident and Humanitarian Coordinator for the occupied Palestinian territories, Jamie McGoldrick.

Thirty years ago, world leaders made a historic commitment to the world’s children by adopting the United Nations Convention on the Rights of the Child (CRC) on 20 November 1989. This international agreement, signed by the Palestinian Authority in 2017, is now the most widely ratified human rights treaty in history and has helped transform children’s lives around the world.

“The Convention on the Rights of the Child remains the most ratified UN Treaty and has played a vital role in improving the lives of children.  We believe that every single child should enjoy every single right, no matter the background, the economic situation of the family, or the gender. In Palestine, we are proud of our partnership with the Palestinian Authority and UN organizations. We are supporting Palestinian teachers, health personnel and social workers who are crucial for children’s health, education and social welfare. We will continue to working towards the goal of a world in which every child has a healthy and safe childhood, the opportunity to learn and a voice to speak for themselves. This world will be realized if we work together to ensure that children’s fundamental human rights are respected, promoted and protected”, said the European Union Head of Political Section, Simone Petroni

In the last decade, major strides have been made to improve the situation of children in Palestine. Some indicators, such as near-universal immunization rates, and very high primary school enrollment rates, including for girls, are amongst the highest in the Middle East and North Africa region. Despite these gains, however, children and young people continue to face many obstacles accessing basic services and fulfilling their rights. These obstacles result from a combination of factors, most significant of which are the very high levels of violence Palestinian children are exposed and subjected to due to the continuing conflict, and in their communities and schools. Children have a right to a life free from violence, said the press release.

“I have walked with hundreds of children over the last 30 days. Almost all of the children I have spoken to have told me how happy they are to have their rights promoted and respected. Many have also told me that they did not realize they had so many rights, and this is the reason this walk has been so important. It is about raising awareness of the CRC, because if people are not aware of their rights it is impossible for them to claim them. Children everywhere, including in Palestine, have the right to an equal chance to reach their innate potential, irrespective of background or circumstance,” said the UNICEF Special Representative for the State of Palestine, Genevieve Boutin.

Masar Ibrahim Al-Khalil is a long-distance cultural hiking route in Palestine. The trail is 330 km long and extends from the village of Rummana northwest of Jenin to Beit Mirsim southwest of Hebron. The trail passes through more than 57 cities and villages.

“My Heritage! My Identity!” is an EU funded project aiming to contribute in preserving and promoting heritage located along the Masar Ibrahim Al-Khalil trail, to enhance Palestinian citizenship and identity. The project is implemented by the Palestinian Center for Rapprochement between People, AFRAT Center, Bethlehem University Institute for Community Partnership, and Tétraktys.