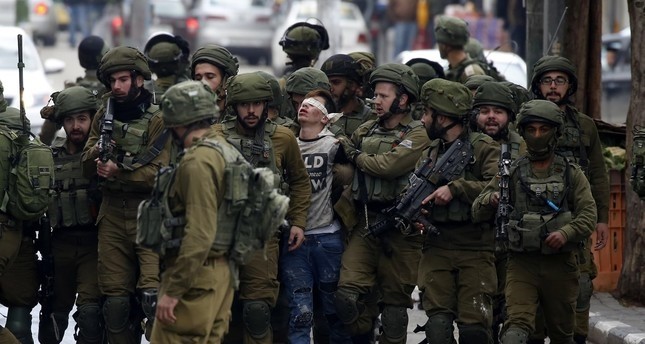 PPS confirmed in a press release that Israeli forces rounded up three Palestinians after ransacking their houses in Anabta town, east of the northern West Bank city of Tulkarem.

PPS confirmed a similar military raid in Anza village, east of Jenin city, resulting in the detention of a Palestinian.

Two others were detained from the northern West Bank district of Qalqilia, said the PPS.

In Ramallah district, PPS said that an Israeli military raid in al-Mazraa al-Gharbiyya village, northwest of Ramallah, resulting in the detention of two Palestinians.

In Bethlehem district, PPS noted that three Palestinians were rounded up, including one from the Bethlehem city neighborhood of Wadi Maali and another from Duheisha refugee camp, south of the city.

In Jerusalem district, Israeli police carried out raids in al-Tur and al-Eissawiya neighborhoods,, resulting in the detention of four Palestinians.

In Hebron district, an Israeli military forces thoroughly searched several houses in Dura and Deir Samet towns, southwest and west of Hebron, turning them upside down. No detention were conducted though.

Israeli forces carry out frequent raids across the West Bank –including occupied East Jerusalem– on the pretext of searching for “wanted” Palestinians, triggering clashes with residents.

These raids, which take place also in areas under the full control of the Palestinian Authority, are conducted with no need for a search warrant, whenever and wherever the military chooses in keeping with its sweeping arbitrary powers.