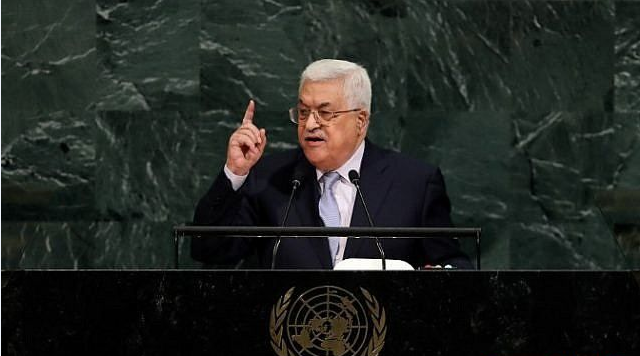 President Mahmoud Abbas reiterated today that if Israel annexes any part of the occupied West Bank, including the Jordan Valley and the northern Dead Sea, then all signed agreements will be terminated.

Speaking before the 74th session of the United Nations General Assembly, President Abbas urged the international community to uphold its responsibilities to bring an end to this Israeli aggression and arrogance.

“A week before the recent Israeli elections, Israel’s Prime Minister, (Benjamin) Netanyahu, came out to arrogantly announce that should he prevail in the election, he would annex and apply Israeli sovereignty to the Jordan Valley, northern Dead Sea, and Israel’s colonial settlements despite the fact that all these areas are occupied Palestinian territory,” said Abbas. “We reject entirely and completely this illegal plan. Our response, if any Israeli Government is to proceed with this plan, all signed agreements with the government of the occupation and any obligations therein will be terminated.”

He said that he had hoped to come back to this session to proclaim the end of the Israeli occupation. “But, regrettably, I stand before you today bearing the same miseries and pain that has been endured for so long by my people, who, despite all that they have suffered of injustice, oppression and occupation – still hold on to the hope of achieving their freedom and independence, as all other nations of the world.”

President Abbas criticized the United States for siding with the Israeli occupation while denying Palestinian rights, stressing that he will not accept any American mediation anymore due to its biased policies. He called for holding an international peace conference, insisting the end of one state, the US, being the sole mediator in the Middle East peace process.

Following is the full official text of the statement by President Mahmoud Abbas at the 74th Session of the United Nations General Assembly:

In the name of God, the most Merciful and Beneficent

Ladies and Gentlemen, Heads and Members of Distinguished Delegations

Peace, Mercy and Blessings of God be upon you.

A week before the recent Israeli elections, Israel’s Prime Minister, Netanyahu, came out to arrogantly announce that should he prevail in the election, he would annex and apply Israeli sovereignty to the Jordan Valley, northern Dead Sea, and Israel’s colonial settlements despite the fact that all these areas are occupied Palestinian territory. We reject entirely and completely this illegal plan. Our response, if any Israeli Government is to proceed with this plan, all signed agreements with the government of the occupation and any obligations therein will be terminated, in line with the previous decisions we have taken in this regard. And, it is our right to defend our rights by all possible means, regardless of consequences, while remaining committed to international law and combating terrorism, and our hands will remain extended for peace.

In this regard, I thank all leaders, countries, and international organizations that condemned and rejected this declaration and Israel’s illegal settlement activities as a whole, which constitute serious violations of UN resolutions and grave breaches of international law.  Moreover, all have reaffirmed that the Palestine question remains a central question for the international community.

I ask you, ladies and gentlemen: what would you do if someone tried take the land of your country and tried to erase your presence in it? It is time for the international community to uphold its responsibilities to bring an end to this Israeli aggression and arrogance.

I had hoped to come to you this year to proclaim together the end of this occupation, the Israeli occupation of my homeland, Palestine. But, regrettably, I stand before you today bearing the same miseries and pain that has been endured for so long by my people, who, despite all that they have suffered of injustice, oppression and occupation – still hold on to the hope of achieving their freedom and independence, as all other nations of the world.

I ask you once again: hasn’t the time come for the emancipation of the Palestinian people and their freedom from this injustice, oppression and occupation?

We also convey our deep appreciation to all countries and peoples that continue to provide support and solidarity to our people and our country, politically and economically, aimed at ending the occupation and building our national institutions, in addition to their continued support to the UN Relief and Works Agency for Palestine Refugees (UNRWA), pending a just and comprehensive solution to the plight our refugees in line with international law.

We are proud that the State of Palestine, despite the obstacles and policies imposed by the Israeli occupation and those behind it, has become a full member in, and a State party to, over 110 international instruments and organizations. It has received the recognition of 140 States from around the world, and is chairing the Group of 77 and China this year. It continues to competently assume its responsibilities at the regional and international levels, as a resilient and constructive member of the international family, and deserves to be a full member of the United Nations and all of its bodies and agencies.

We accepted international legitimacy and international law as the framework and judgment to resolve our cause, and we have strived for and continue to seek a just and comprehensive peace. But, the international law that we have accepted and held firm to and the peace that we strive for are now severely endangered as a result of the policies and practices of Israel in our occupied land and its reneging on signed agreements since the Oslo accords in 1993 to the present. The responsibility for defending and preserving international law and peace is incumbent upon you.

In East Jerusalem, the occupying Power is waging a reckless, racist war against everything Palestinian, from the confiscation and demolition of homes, to assaults on clergy, to the eviction of our citizens from their homes, to attempts to violate the sanctity of the holy Al-Aqsa Mosque and Church of the Holy Sepulcher, to the legislation of racist laws, to the denial of access by worshippers to the holy places.

We are confident that the international community will not accept Israel’s arbitrary decision to withhold our revenues, and to confiscate a part of it, which is deepening the suffering of our people and preventing us from fulfilling our financial obligations towards them and also exacerbate the economic crisis our country is enduring due to a lack of resources and the decision by some parties and countries to suspend their commitments towards us.

Yet, the Palestinian people will not surrender to the Israeli occupation regardless of the circumstances, and no matter the pain, and will remain steadfast on their land, resisting occupation by all available means, foremost peaceful popular resistance. This is our legitimate right and our national and moral obligation. Let everyone know that occupation cannot bring peace or security or stability for anyone.

What is unfortunate and shocking is that the US administration – a permanent member of the Security Council that is responsible for the maintenance of international peace and security and upholds UN resolutions – is supporting the Israeli aggression against us, reneging on its international political, legal and moral obligations. The US administration has undertaken extremely aggressive and unlawful measures, declaring Jerusalem as the so-called “capital of Israel” and moving its embassy there, and in blatant provocation to the sensitivities of hundreds of millions of Muslims and Christians, for whom Jerusalem is a central part of their religious faith.

Jerusalem will remain the eternal capital of Palestine regardless of any such schemes or actions.

The US administration did not stop there, but also decided to close the representation of the Palestine Liberation Organization in Washington, and some its officials have claimed that the Israeli settlements on our occupied territory are “legitimate”. Moreover, it immorally and inhumanely terminated all of its contributions to UNRWA.

Then, it somehow speaks of the so-called “Deal of the century”, and peddles deceptive and illusive economic “solutions”, after it destroyed by its policies and measures all possibilities to achieve peace.

This US policy has emboldened the government of the Israeli occupation to renege all signed agreements with us and its commitments towards peace, depriving the peace process of any credibility, pushing large segments of the Palestinian people to lose hope in the possibility of long-awaited peace, and jeopardizing the two-State solution.

This has led many to seriously question: if the two-State solution has become impossible because of Israel’s policies, then why don’t we pursue a one-state solution where all citizens can be fairly treated and are equal in rights and duties?

Here, I must ask you: How can I answer these questions raised by the people? How can one fulfill reciprocal commitments that the other side is not abiding by? And despite all of this, I remain committed to the two-State solution.

From our side, we have never missed an opportunity to hold serious negotiations with the Israeli side. We have constructively engaged with all initiatives proposed and based on UN resolutions and international law. However, regrettably, we have not found an Israeli partner, and found instead obstacles and challenges imposed by the Israeli government that continues to refuse to come to the negotiating table.

Despite all this, ladies and gentlemen, I renew the call for the convening of an international peace conference in line with the initiative I presented before the Security Council in February 2018.  This peace conference should include permanent members of the Security Council, the members of the Quartet as well as relevant Arab and international stakeholders, to adopt a plan based on the international consensus, UN resolutions and the Arab Peace Initiative, within a defined timeframe, to end the occupation, achieve the independence of our State and end the conflict. We cannot accept that the shepherding of peace be monopolized by one country.

From the outset, we have believed in democracy as a foundation for the building of our State and society. We have enshrined this in our constitution and exercised this on the ground. We conducted general elections in 1996, 2005 and 2006, in addition to regular local elections.

However, this democratic process was paralyzed by the coup by Hamas in 2007, which is an unbearable situation. Therefore, I have decided, upon my return from this international gathering, to announce a date for the holding of general elections in Palestine – in the West Bank, including East Jerusalem and the Gaza Strip. I call on the UN and the relevant international organizations to monitor these elections, and I will attribute full responsibility to those who may attempt to prevent it from happening on the date determined.

In conclusion, I salute all our Palestinian people in Palestine, in the refugee camps and Diaspora and across the world and express our pride in them. I tell them: we are confident that this occupation, like all occupation that preceded it, will inevitably end; that the dawn of freedom and independence is coming; and that the oppression and aggression they have endured for so long will not last. A right is never lost as long as someone strives to claim it.

We salute our honorable martyrs, courageous prisoners and wounded heroes, and salute their resilient families who we will not give up on their rights. We salute to those remaining steadfast in our beloved homeland. The date of our freedom and the independence of State with its eternal capital Al-Quds is soon approaching.

I thank you, Mr. President, Excellencies, Ladies and Gentlemen.