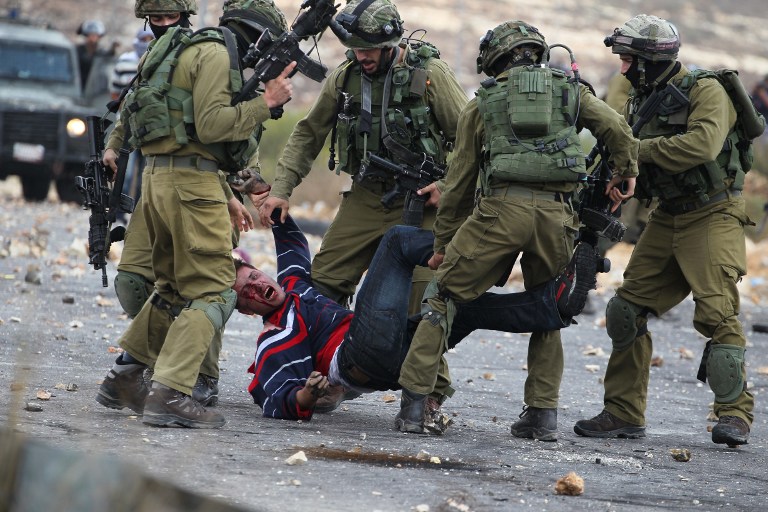 Israeli soldiers detain a wounded Palestinian stone thrower after infiltrated members of the Israeli security forces shot at fellow protesters during clashes in Beit El, on the outskirts of the West Bank city of Ramallah, on October 7, 2015. New violence rocked Israel and the Israeli-occupied West Bank, including a stabbing in annexed east Jerusalem, even as Israel and Palestinian president Mahmud Abbas took steps to ease tensions. AFP PHOTO / ABBAS MOMANI

The Israeli High Court today gave the Israeli military the green-light to keep bodies of Palestinians killed by Israelis as a bargaining chip in any future exchange negotiations, according to the Jerusalem Legal Aid and Human Rights Center (JLAC).

It said an expanded High Court hearing of seven judges ruled 4 to 3 in favor of giving the military governor the power to withhold bodies of dead Palestinians and bury them for a period of time and use them in the future as a bargaining chip.

The court said that Israeli emergency regulations permit the Israeli military to order the interim burial of bodies designated as deceased enemies, based on considerations that take into account state security, civil order, and the need to negotiate for the return of the bodies of Israeli soldiers, according to Adalah, the Legal Center for Arab Minority Rights in Israel..

The new ruling overturns an earlier decision by a regular High Court which said the military ruler does not have the power to keep the bodies of the dead Palestinians.

“This is the first time in history that a court – anywhere in the world – authorizes state authorities to hold the bodies of subjects under its control, to which international laws governing occupation apply, and to use them as bargaining chips. This is one of the most extreme Supreme Court rulings since 1948, as it undermines the most basic principles of universal humanity. The court ruling is in violation of Israeli law and violates international law, most notably the United Nations Convention against Torture and Other Cruel, Inhuman or Degrading Treatment or Punishment,” said Adalah in a statement.

“This is an extremely racist ruling that runs contrary to international law but, yet, is consistent with the Israeli government’s political decisions. This is collective punishment. The families will consider appealing to international courts in an effort to do everything possible to recover the bodies of their loved ones,” said Muhammad Alyan, one of the petitioners, in a statement issued on behalf of the Palestinian families:

The petition involved bodies of 13 Palestinians recently killed by Israel.