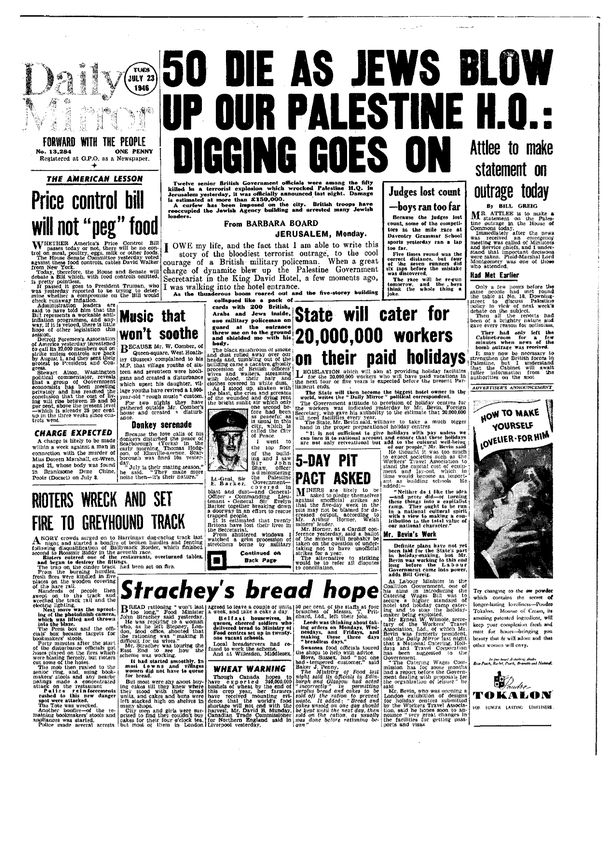 The King David Hotel explosion of July 22, 1946 (Palestine), resulted in the deaths of more than 92 innocent civilians in Jerusalem, and in the wounding of 58. 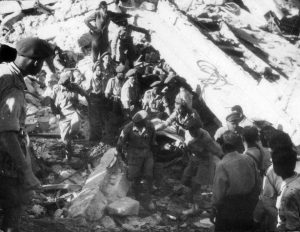 King David Hotel was used as an office housing the Secretariat of the Palestine Government and British Army Headquarters. The attack was made on 22 July at about 12 o’clock noon when offices are usually in full swing. The attackers, disguised as milkmen, carried the explosives in milk containers, placed them in the basement of the Hotel and ran away.

The Prime Minister responded back then responded: “It appears that, after exploding a small bomb in the street, presumably as a diversionary measure– this did virtually no damage– a lorry drove up to the tradesmen’s entrance of the King David Hotel and the occupants, after holding up the staff at pistol point, entered the kitchen premises carrying a number of milk cans. At some stage of the proceedings, they shot and seriously wounded a British soldier who attempted to interfere with them. 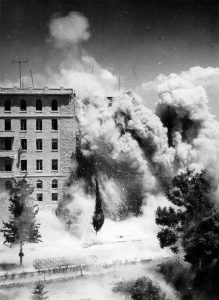 This was not just an act of “Jewish extremists” but a premeditated massacre conducted by the Irgun in agreement with the highest Jewish political authorities in Palestine– the Jewish Agency and its head David-Ben-Gurion. Although members of the Irgun Z’vai Leumi took responsibility for this crime, yet they also made it public later that they obtained the consent and approval of the Haganah Command, and it follows, that of the Jewish Agency.

According to Yitshaq Ben-Ami, a Palestinian Jew who spent 30 years in exile after the establishment of Israel investigating the crimes of the “ruthless clique heading the internal Zionist movement,” The Irgun had conceived a plan for the King David attack early in 1946, but the green light was given only on July first. According to Dr. Sneh, the operation was personally approved by Ben-Gurion, from his self-exile in Europe. Sadeh, the operations officer of the Haganah, and Giddy Paglin, the head of the Irgun operation under Menachem Begin agreed that thirty-five minutes advance notice would give the British time enough to evacuate the wing, without enabling them to disarm the explosion. 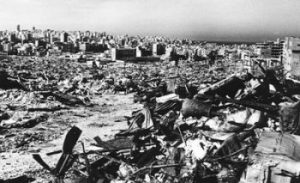 Ruins of the Hotel

Palestine were not merely the actions of “fringe” groups such as the Irgun and Stern Gang, but were committed in collusion with the Haganah and Palmach groups and under the direction of the highest political body of the Zionist establishment itself, namely the Jewish Agency.

Losing lives of innocent civilians is just a normal part of the pattern of the history of Zionist outrages: A criminal act is committed, allegedly by an isolated group, but actually under the direct authorization of the highest Zionist authorities, whether of the Jewish Agency. 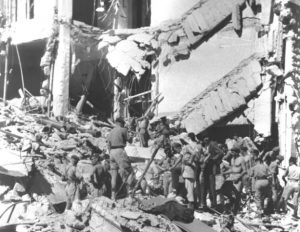