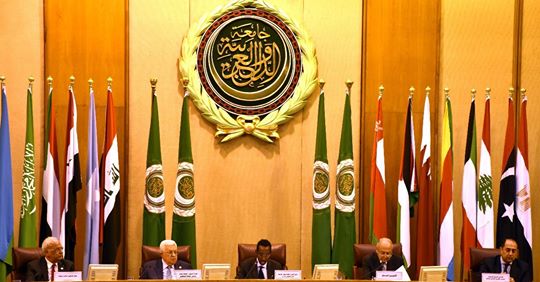 Palestinian President Mahmoud Abbas said that the Palestinian situation is very difficult, intolerable, and unsustainable, asserted that Palestinians need Arab political and financial support to face future challenges, on Sunday, at the extraordinary session of the Arab League Council at the ministerial level in Cairo.

President Abbas said he will call the Palestinian parliament; the Central Council, the second highest Palestinian decision making body after the National Council, to convene Mid-May to make the appropriate decisions about the relationship with Israel and the United States, he also reiterated his rejection of Israel’s annexation of the occupied Arab territories.

The president reaffirmed that Israeli Prime Minister Benjamin Netanyahu does not believe in peace, stressed that Israel had not implemented a single international resolution since 1947, and has broken all signed agreements and violated the Paris Agreement by deducting Palestinian tax revenues.

Commenting on the American so-called “deal of the century”, the President inquired that after the US recognition of Jerusalem as the capital of Israel and transferring its Embassy there, halting its aid to UNRWA, and closing the office of the PLO in Washington, what is left of this deal?

AS for the national reconciliation, President Abbas said he is determined to achieve reconciliation, despite Hamas’ rejection, Abbas noted that the Israeli government is transferring money to Hamas to keep the Palestinians divided.

” We are fulfilling our responsibilities towards our people in the Gaza Strip” Abbas said.

The President called on the Arab countries to provide political and financial support to help the Palestinian Authority face the challenges ahead and preserve the Palestinian national project.